During class yesterday, we have briefly discussed whether markets have the responsibility to ensure affordability of certain goods. I would have appreciated to go a bit deeper into that topic and would like to share my thoughts regarding grocery markets.
In 2008, I spent a few months in California where I was nothing but shocked about the market settings compared to those I am familiar with from continental Europe. The stereotypical picture of an American who is addicted to fast food, too convenient to do anything without his car, and is consequently let’s call it horizontally handicapped, is only true to some extent – the question of affordability of healthy and ecological goods is also tremendously relevant. My first impressions were shocking. On Mondays, McDonald’s had the bargain of BigMacs for US$ 1,-, and Cokes (jumbo size) for $ 0.69, whereas a small bag of simple green lettuce on a local farmer-market cost $4 and a medium-sized portion of cherries were to buy for $9in a grocery store. Given these irresponsible relations, I realised that a large number of citizens simply cannot afford the consumption of more ecologically friendly (and more healthy) products.

To provide a solution, I would like to see a bipartite approach.
First of all, a major information campaign is required to spread awareness and educate citizens. To create a mutual foundation of education, a governmental involvement seems necessary as the European Commission already prepares to. A compulsory labeling is currently under discussion and triggers a lot of controversies. Major brands like Coca Cola or Ferrero may see themselves confronted with highly unbeneficial and thus, try to influence the policy-making. Such a labeling, which already exists at some retailers and some of their goods, could be implemented along with carbon footprint information as Tesco for instance already does so with over 100 tesco-products. 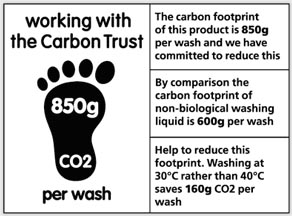 Moreover, the nutrition-scientific compliance of a product tends to come along with the sustainability of itself. Its labeling is also still suboptimal. A further incentivisation for the consumers should be installed. Based on the ecological and nutritional compliance of groceries, a price levelling should take place. A penalty tax for lacking compliance seems difficult to implement, but at least an adjustment of VAT rates appears feasible. This is common in some states already (e.g. Germany, where food has a lower VAT levy). A scientifically supported clarity is inevitable though as purchase decisions might be influenced.

Even though people with lower income tend to avoid buying “sustainably produced products” due to eventually higher price, it is essential to raise their awareness and offer them the choice to opt between products with different carbon footprints within one price segment.